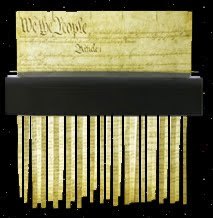 Dems Vote for Slaughter House Rule Democrats shot down a Republican effort to force an up-or-down vote on the Senate healthcare bill on Thursday afternoon. (they voted to NOT HAVE A VOTE!)

In a 222-203 vote, Democrats beat back a GOP resolution offered by Democrat-turned-Republican Rep. Parker Griffith (Ala.) that would have forced lawmakers to vote on the Senate healthcare bill separately from the series of fixes they hope to make to that legislation.

All Republican lawmakers who voted opposed the measure, which had the effect of ending the GOP's effort to force a vote. They were joined by 28 Democrats, who broke with party members on the vote.

Let's remember the 222 that voted to shred the constitution.

Yeah, I saw that.
Stern is your typical successful Liberal that is for every Liberal cause to come down the pike.................until they come knocking at his door and nipping at his liberties. In this case, broadcasting.