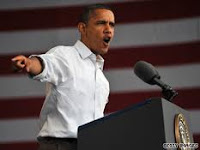 Two days ago at his press conference, Obama dropped this little nuggett.
"And I do not want, and I will not accept, a deal in which I am asked to do nothing, in fact, I’m able to keep hundreds of thousands of dollars in additional income that I don’t need, while a parent out there who is struggling to figure out how to send their kid to college suddenly finds that they’ve got a couple thousand dollars less in grants or student loans."
So in Obama-World, if I make $350,000 a year and my "nut" is $120,000 that $230,000 of "additional income" shouldn't be mine but the government's to dole out?
Does anyone think that Obama's "your money is the government's money" mindset is having an impact on the mind's of America's job creators? I know this administration doesn't give a shit about capitalism, but somebody better start paying attention to THIS.