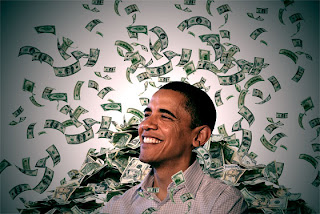 I received the following email yesterday.

I can't believe these guys are still pushing for more donations. Isn't the election over?

Barack Obama will be sworn in as President of the United States of America on January 20th, 2009.

It will be an unprecedented event in the history of our country, and hundreds of thousands of people will come together in Washington, D.C. to share the moment.

Supporters like you made this happen. You know that real change comes from the bottom up, not from the top down, and Barack and Joe want you to join them on this historic day. They want to start off this administration with the people who worked so hard and will continue to fight for change with them.

Between now and January 8th, 10 supporters and their guests will be selected to join the Inaugural activities.

If you make a donation — in any amount — to make the Inauguration a success, you and a guest could be flown to Washington, D.C., put up in a hotel, and be there as Barack is sworn in as the 44th President.

Make a donation of $5 or more right now. You and a guest could receive your ticket to history.

Unlike past inaugurations, this year’s event will not be paid for by Washington lobbyists or corporations.

This campaign was funded by 4 million ordinary people giving only what they could afford, and Barack and Joe are counting on you again. Help start this administration off right — independent of the special interest donors who have shaped Washington for too long.

This Inauguration will be open to as many Americans as possible. We’ll all come together to celebrate the hope and optimism that define this movement for change.

But you could be one of 10 selected to join us in Washington for all Inaugural events. Any donation you make between now and January 8th counts — whatever you can afford.

The Inauguration will be a once-in-a-lifetime event. I hope you can join us.

P.S. — If you cannot make a donation, you and a guest could still be selected to receive your ticket to history. Learn more here.

The President and the Presidency are for sale, and America is too blind to see it!