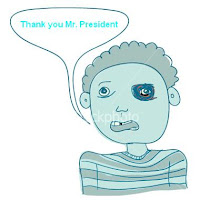 Last week, Education Secretary Arne Duncan said that poor children getting vouchers to attend private schools in the District of Columbia should be allowed to stay there, but by signing the bill, Obama has denied those poor children an education............ much like the one his girls are getting.

"I don't think it makes sense to take kids out of a school where they're happy and safe and satisfied and learning," Duncan said. "I think those kids need to stay in their school."

Maybe the president is only trying to reduce the size of his daughter's classes??