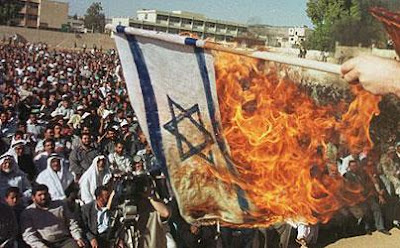 There's just one problem, he's getting tough with the wrong country. Israel.

After meeting with Palestinian President Mahmoud Abbas at the White House yesterday, President Obama stressed that Israel's obligations, yes, obligations, toward peace include "stopping settlements" and supporting a Palestinian state. These comments were following very terse comments from Sec. Clinton. The US "wants to see a stop to settlements -- not some settlements, not outposts, not natural-growth exceptions," Mrs. Clinton said, in what is basically the administration's most stark renunciation of Prime Minister Benjamin Netanyahu's West Bank policies.

So what is Neteanyahu to do? Was he just recently elected to withdraw settlements from the West Bank? Is that what the Israelis want? I DON'T THINK SO!

Has removing settlements from the West Bank made Israel any safer in the past? NO!

Obviously all this is based on the assumption that Obama is going to get tough with Iran if Israel does as it's told. Is that the signal that Obama is sending Israel?? I DON'T THINK SO!

This administration is pouring gasoline on Israel............. while Iran is holding a match.