Ok Republicans, TAG YOU'RE IT! 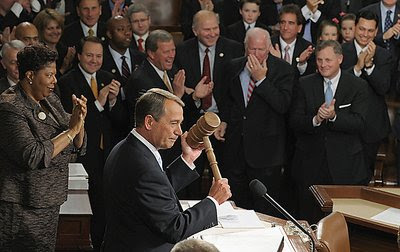 You guys are now in control of the Congress and you were sent to do a job, a job that requires you to turn this spending madness around, and bring fiscal responsibility to Washington.
Please don't get bogged-down with petty things and just focus on reducing debt, cutting down the size of the federal government, and creating a pro-business/pro-investment environment.
Please don't get wrapped-up in going after Obama with hearings or in the courts. Americans don’t like that.
Sure the guy has been a disaster for everything working, capitalist Americans believe in, but his presidency has already been defined as a complete failure. Unless you’re a Socialist.
As I recently told a fundraiser for Marco Rubio seeking additional contributions “you guys are on probation” and if you do what you promised to do on the campaign trail, you’ll again have my support.
NOW GO DO THE RIGHT THING!
Posted by Joaquin at 4:17 PM

As I write this, a song called 'Boys Don't Cry' by The Cure just started on my Pandora.

Now, let me see if I can recall each time Mr. Boner cried since the election. First, there was election night. Second, he cried on TV. I believe that was on 60 minutes or something. How embarrassing! Lastly, he teared up when he 'took the gavel' yesterday.

If Boys Don't Cry, then men certainly shouldn't either!

I'm not sure leadership is 'mature' enough not to focus on pettiness.

I'll give the Speaker a pass on the crying. It does make me roll my eyes, but I'll let it go.
These guys have an opportunity to get it right, and if they don't, I can assure you they'll get booted in 2012. The message was clear.