Joe, you and Hosni are about 10 years too late! 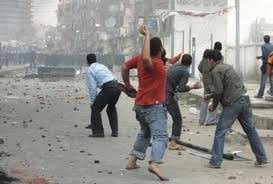 When VP Joe Bidden was asked whether Egypt's President Mubarak should step down, he responded:
"No. I think the time has come for President Mubarak to begin to move in the direction that – to be more responsive to some of the needs of the people out there."

NO, he shouldn’t step down! Really?

And “ THE TIME HAS COME”? Now that Tunisia has fallen and hundreds of thousands are marching through Egyptian cities? Now is the time? Really?

So Mubarak needs to BEGIN to move in that direction? BEGIN?

He needs to be responsive to SOME of the people? SOME?

Very insightful Joe, and spoken like the ultimate politician.
Let’s also note that this has been the only “voice’ of the Obama administration.
Posted by Joaquin at 2:01 PM

The U.S. is in an interesting position. We support Democracy and Freedom. In fact, W used that to defend the Iraq war when we found no WMDs. Yet, we supported a dictator in Mubarak for 30 years b/c he was our ally. Now, when people protest his rule, Obama and Clinton are calling for a 'smooth transition.' If I'm Mubarak, that knife in my back kinda hurts!

Yemen is next, and Jordan and Saudi Arabia are watching closely.

We are in an "interesting" position. Israel however, is in a perilous position.

If the Muslim Brotherhood takes over Egypt and makes 'noise' in Jordan, what can the U.S. possibly do? Those people have to make their own decisions.

The only thing we can do to help Israel is publicly back them, which O refuses to do. If these countries go 'hard-line' and decide to attack Israel, they need to know that the U.S. will defend Israel with everything.

You really think O "will defend Israel with everything"?
If Egypt, Syria and Lebanon strike, what are we going to do, send troops?

The only thing O can defend is himself from a fly.