THIS SOUNDS EQUITABLE, NO??? 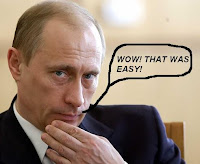 Russia and the United States have tentatively agreed to a weapons inspection program that would allow Russians to visit nuclear sites in America to count missiles and warheads.

The plan, which Fox News has learned was agreed to in principle during negotiations, would constitute the most intrusive weapons inspection program the U.S. has ever accepted.

Foreign Minister Sergey Lavrov, who met with Secretary of State Hillary Clinton, said publicly Tuesday that the two nations have made "considerable" progress toward reaching agreement on a new strategic arms treaty.

The 1991 Strategic Arms Reduction Treaty, or START, expires in December and negotiators have been racing to reach agreement on a successor.

Clinton said the U.S. would be as transparent as possible.

"We want to ensure that every question that the Russian military or Russian government asks is answered," she said, calling missile defense "another area for deep cooperation between our countries."

On another critical issue, Lavrov declared that it would be counterproductive to threaten Iran with more sanctions over its nuclear program -- as he resisted efforts by Clinton to win agreement for tougher measures should Iran fail to prove its program is peaceful.

It's okay, Joaquin. By playing nice, all of our global problems will be solved. Remember, Obama is God's child and was sent here to bring peace upon Earth. He must be doing the right thing. We have to listen to him, follow him, worship him. I have heeded the words of brother Russell. I urge you to do the same before you cause the apocalypse!

LOL...aw man...I didn't realize this was you guys.

This story cannot possibly be real....right?