WOW! Clever way of reducing our dependence on foreign oil! 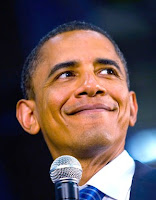 Let's remember that Obama has not only refused to lift the ban on offshore drilling, but he has consistently demonized oil and gas companies whenever possible. Obama has also done everything possible to stop Alaskan exploration and drilling. So, when he addressed a group of Brazilian businessmen at a CEO Summit during his trip to South America over the weekend, he told them that they should begin drilling in their offshore oil reserves so the United States can be a paying customer in the future, adding that the United States would help them do it.

Obama told them: “We want to help you with the technology and support to develop these oil reserves safely. And when you’re ready to start selling, we want to be one of your best customers. At a time when we’ve been reminded how easily instability in other parts of the world can affect the price of oil, the United States could not be happier with the potential for a new, stable source of energy.”