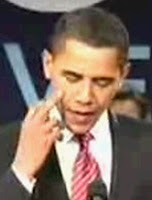 Today, it's a different story. WOW! IMAGINE THAT!

SALT LAKE CITY -- In his second reversal of a Bush administration decision, Interior Secretary Ken Salazar said Wednesday that he is scrapping leases for oil-shale development on federal land in Colorado, Utah and Wyoming.

Salazar rescinded a lease offer made last month for research, development and demonstration projects that could have led to oil-shale exploration on 1.9 million acres in the three states.

It was the second time Salazar has reversed the Bush administration. He also halted the leasing of oil and gas drilling parcels near national parks in Utah this month.

A trade association of independent oil and natural gas producers criticized Salazar's decision. "It's part of a pattern of decisions by the secretary that are detrimental to all sources of domestic energy," said Kathleen Sgamma, government affairs director for the Denver-based Independent Petroleum Association of Mountain States.