EXCUSE ME, BUT HOW THE F*CK DO YOU SPELL TSA? 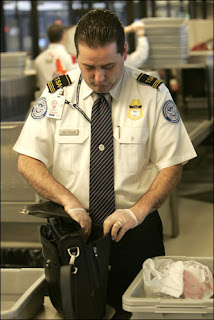 Senior administration officials say that Faisal Shahzad was put on the no fly list on Monday at 12:30 pm ET.

So how was he able to board the Emirates Airlines flight to Dubai?

“It takes a few hours for the airlines system to catch up,” a senior administration official tells ABC news.

Another senior administration official adds that Emirates refreshes their system to update with US intelligence information periodically – but not frequently.

In any case, the first official says that airlines were “within minutes” of Shahzad being put on the no-fly list told to “look at a web-board” and manually check its passenger manifest against the news on the web board.

“That appears to not have happened” the official says. “For whatever reason there was a breakdown at the Emirates level.”

You didn't think Obama or the TSA would take the blame, did you? :)