LA Councilwoman doesn't have enough to worry about. 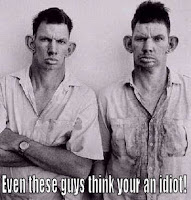 Kobe Bryant and the Lakers not only have to worry about beating Steve Nash's Phoenix Suns in the Western Conference Finals, they also have to make sure to pack enough sandwiches.
LA City Councilwoman Janice Hahn, who proposed the approved city boycott of Arizona over its new immigration law, says she's sending a checklist of items for Lakers players to bring on road trips to Arizona so they don't end up spending one cent in the Valley of the Sun.
"Councilwoman Hahn is confident that the Lakers are only going to need two trips to Arizona to sweep the series," Michael Trujillo, the manager of her campaign for Lieutenant Governor, told the LA Weekly. "Furthermore she will be sending a checklist of items for each Lakers player to bring so they won't need to purchase anything while in Arizona."

This person is an idiot I cannot even call her a women, the only people the Lakers will be hurting are the very hard working people who depend on the revenue from the sales of all the people attending this event.
Thank-you California we now understand why you are failing, could it be because of your twisted thiunking?

This new Arizona state law is VERY similar to a Federal law INA Section 287(g). Is L.A. going to ask the Lakers to make their own sandwiches for every game in every city they travel to next season?

This is a complete knee-jerk reaction against Arizona to something that's already happening in many cities across the United States.

IS INA Section 287(g)
BEING ENFORCED OR UTILIZED?

If it were, would Arizona be taking the steps it's taking?

Hey, you know more about this than I do.

There has to be a close working relationship between ICE and State police. ICE has time to make that happen in some places. I doubt they have as much time in Arizona where there are more drug/crime related immigration issues.

So, Arizona is being conveniently singled-out?
The liberal whipping-boy du-jour!