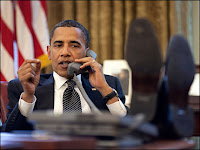 It's being reported that Israelis are in a tizzy over the photo on the left of Pres. Hopey-Changey talking to Israeli PM Netanyahu.
"It is considered an insult in the Arab world to show the sole of your shoe to someone. It is not a Jewish custom necessarily, but Israel feels enough a part of the Middle East after 60 years to be insulted too"
Ok, I get it, but to me, it's a little petty.
Here is what has me a little pissed.
That desk that Hopey Changey happens to have his feet on is the Resolute Desk, one of the, if not the most historic piece of furniture in the United States. Why would anyone put their feet up on that piece of history?
What's next? Light your cigarette at the John Kennedy grave torch?
Posted by Joaquin at 10:20 AM

Dude, you think Obama is the first person to put his feet on that desk?

Yes, Barack Hussein doesn't have to worry about history because he doesn't know any (and if he did, that knowledge wouldn't affect his narcissim)‚ and he has no respect for relics (narcissim again). For him, life in the White House is all just one fun ride on Air Force One, sweetened by the knowledge that he's managed to pull one over on dozens (or maybe hundreds) of millions of people.

I disagree with you about the shoe sole thing though. Obama's inner Muslim (or outer handlers) would never allow such a photo to be published in connection with any Muslim leader. If he did, there would be riots all over the world.

Murali, would you? And if you did, would you let yourself be photographed?

Monica Lewinsky was beneath that desk and Clinton probably shot half his wad onto the side of it, so I'll give Obambi a pass on this one. ;-)