Go ahead! I dare ya! 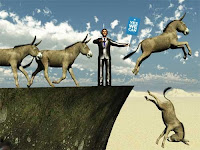 The president reportedly is working on health care legislation intended to reconcile differences between House and Senate Democrats that could be attached to a budget bill and pass with only 51 Senate votes.
The White House signaled Thursday that an aggressive, all-Democratic strategy for overhauling the nation's health system remains a serious option, even as Obama invites Republicans to next week's televised summit to seek possible compromises.

UPDATE: Harry Reid is now saying that he plans on moving forward on the reconciliation in about 60 days. Beautiful move, Harry! Right around tax time!

This just in from the CBO Director:
“This morning the Obama Administration released a description of its health care proposal, and CBO has already received several requests to provide a cost estimate for that proposal. We had not previously received the proposal, and we have just begun the process of reviewing it—a process that will take some time, given the complexity of the issues involved. Although the proposal reflects many elements that were included in the health care bills passed by the House and the Senate last year, it modifies many of those elements and also includes new ones. Moreover, preparing a cost estimate requires very detailed specifications of numerous provisions, and the materials that were released this morning do not provide sufficient detail on all of the provisions. Therefore, CBO cannot provide a cost estimate for the proposal without additional detail, and, even if such detail were provided, analyzing the proposal would be a time-consuming process that could not be completed this week.”
Posted by Joaquin at 2:24 PM