SURE, I WAS PULLING FOR THE US WOMEN, BUT I SURE LIKE THE CANADIAN'S STYLE! 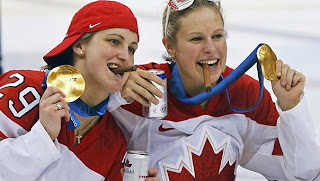 VANCOUVER, British Columbia -- The women of the Canadian hockey team politely accepted their gold medals and waved to an adoring crowd. And then the real celebration began.

More than half an hour after they beat the United States 2-0 on Thursday, the players came back from the locker room and staged a party on ice -- swigging from bottles of champagne, guzzling beer and smoking cigars.

Although some idiots at the IOC frowned-upon the celebration, Steve Keough, a spokesman for the Canadian Olympic Committee, said "In terms of the actual celebration, it's not exactly something uncommon in Canada,".

AND THAT'S WHAT I'M TALKING ABOUT!!!