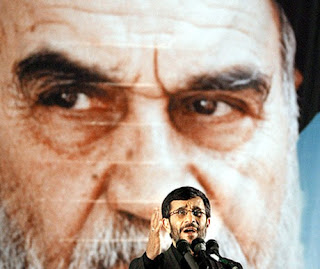 President Obama and the leaders of France and Britain blasted Iran's construction of a previously unacknowledged uranium enrichment facility and demanded Friday that Tehran immediately fulfill its obligations under international law or risk the imposition of harsh new sanctions.

"Iran is breaking rules that all nations must follow," Obama said, detailing how the facility near Qom had been under construction for years without being disclosed, as required, to the International Atomic Energy Agency. "International law is not an empty promise."

PFFFFFT!!!! Did he say, Iran is breaking rules??

Is this guy serious?

How long have we been hearing about Iran enriching uranium, and what has anyone done about it? NOTHING! Now every leader of the free world is acting shocked and outraged at this, and are calling for an investigation and maybe some sanctions. Yeah, that will put an end to Iran's nuclear projects.

Unfortunately, the only solution to all this rests with Israel who is in the cross hairs of an Iranian nuclear devise. Will Obama give Israel the "green light' to after the Iranian facilities? If you're Israel do you believe a word he says? Can Israel depend on the US to defend any actions Israel might take? Would you?

Here is what Obama had to say. *yawn*

Any sanctions imposed on Iran will be useless unless China and Russia are on board. The fact that leaders from those two countries were absent at this 'press conference' speaks volumes.

What is Mahmoud doing right now? He's test firing missiles and conducting war games. That is his fuck you to the U.S., France and Britain.

When are these idiots going to embrace the dark side of human nature and understand that 'lovey doviness' (a.k.a diplomacy) doesn't work most of the time?

You are 100% right. Without China and Russia, there won't be any UN/World action on Iran. And if there were actions take, they would be in the form of UN resolutions, which are laughable.
I can honestly say that I don't believe Obama and this bunch believe Venezuela, Iran, Lybia, and even N. Korea are the enemy. They were Bush's enemies, which makes them.................