IT'S GOOD TO KNOW WHERE THEIR PRIORITIES STAND 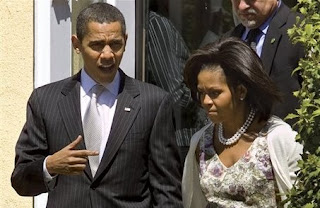 When asked about their trip to Copenhagen to lobby for Chicago's bid for the 2016 Olympics, First lady Michelle Obama vowed Monday to "take no prisoners"

"It's a battle -- we're going to win -- take no prisoners," the first lady said with a smile at a discussion with reporters in the White House State Dining Room....

I'm always worried about using the word "victory" because, you know, it invokes this notion of Emperor Hirohito coming down and signing a surrender to MacArthur.

As if these comments aren't worrisome enough, I have to note that Emperor Hirohito didn't "come down" and surrendered to MacArthur, he sent Foreign Minister Mamoru Shigemitsu. Then again, as a Community Organizer I don't expect Obama to 'be up on history'
Oh, and by the way, is there any doubt whatsoever that there are a lot of friends in Chicago waiting to make a bunch of C H A N G E off of the Olympics?
Would the two Community Organizers be traveling to Copenhagen if Seattle or Dallas were bidding instead of Chicago?

UPDATE: And then there's THIS

. . . and Hope that news of Afghanistan and Iran gets replaced by color photos of Michelle's "buff" arms and Obama's un-change-able smile.

I have a feeling that all of this is a charade, and the Chicago selection is a done deal.