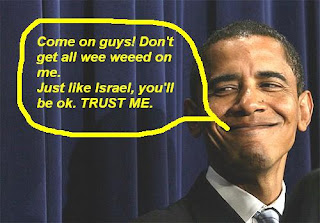 Recent events in the region have rattled nerves throughout central and eastern Europe, a region controlled by Moscow during the Cold War, including the war last summer between Russia and Georgia and ongoing efforts by Russia to regain influence in Ukraine. A Russian cutoff of gas to Ukraine last winter left many Europeans without heat.

The scraped plan would have been "a major step in preventing various disturbing trends in our region of the world," Kaczynski said.

But that's ok, no need to worry. Secretary of Defense Robert Gates said he still sees a chance for Poles and Czechs to participate in the redesigned missile defense system.

See! the Obama administration is going to redesign a new missile system. You guys have nothing to worry about.

Pretty soon Nancy Pelosi will "see a chance" for the Republicans to redesign "health care reform," and Barack Obama will retire from television.