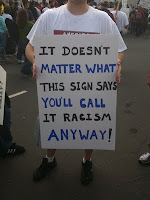 In this past election a lot of people that voted for Obama did so as a sign that our country was moving away from racism. I'm not sure I buy that line of thinking, but I'll accept it.
Now it is clearly obvious that ANY criticism of Obama is labeled by the LibDems as racist.
If a demonstration takes place criticizing Obama or his policies, the gathering we are told..... has racial undertones.
If a radio/TV show host bashes Obama, we are told that the host's comments are racially motivated.
When Clarence Thomas was getting crucified by LibDems, did conservatives shout RACISM? No. When Richard Steele is mocked by the MSM, do conservatives shout RACISM? No.
Commenting on the Joe Wilson incident, Jimmy Carter said: ''I think it's based on racism,'' Carter said. ''There is an inherent feeling among many in this country that an African-American should not be president.''
Sure Jimmy, except for the fact that the ones playing the race card are Democrats beginning with The Community Organizer in Chief.
Who was it that attacked Bill Clinton with racism during the primaries?
Who attacked Geraldine Ferraro with racism?
Who took a racist shot at Hillary?
Bottom line is that when ever you hear the words bigot, sexist, homophobes it's coming from LibDem lips. Racist is just the latest fashionable word in the LibDem arsenal.
Oh, and by the way, I'm still waiting for a LibDem to explain Sen. Robert Byrd to me.
Posted by Joaquin at 12:39 PM

The only trouble with doing "look over there" on joaquin's blog is that there's no conversation to sidetrack.

How's that Obama vote working out for me, Joaquin? Fine, thanks for asking. Any time I feel my enthusiasm slacking, I just have to imagine the alternative.

That's great Wilbur!
Working for ACORN/Soros has to be very rewarding.

Hate to break it to you Joaquin, but you do not have to work for Acorn or Soros to share my opinion, you only have to be one of a solid majority of the American electorate.

And you might as well censor or ban me now, like you did to Quaker. I know you feel threatened by opposing viewpoints; that's why you're a right-winger.

Enjoy giving vent to your OBS!

Wilbur have you looked at the latest numbers for the Community Organizer in Chief? Popular fella, eh?

You and anyone can post anytime, but it needs to be somewhat civil. No one is censored, but if their comment is real stupid then I may delete it.......only to save them further embarrassment.

BTW if you want to comment and or provide insight on the POLITICAL DISSENT = RACISM topic, have at it.

Have I looked at the latest polls? Yes. RCP's nonpartisan poll of polls currently has Obama at +11. Your point?

If you want to delete something that might cause someone future embarrassment, may I suggest your last comment here, or perhaps this whole blog?

My take on "political dissent = racism"? I think there have been some charges of racism that are unwarranted. The idea, for instance, that Bush calling Obama "cat" is racist is idiotic. However, I also that in the vast majority of cases where right-wingers are accused of being racist there's more to the accusation than "dissent = racism". I think the right is hiding behind cases like "cat=racism" to deflect attention from real cases of racism in their ranks. Until groups like the republicans and the teabaggers stop deflecting and actively address the problem of coddling racism within, they will continue to marginalize themselves and make it hard for anyone who hasn't already swallowed their kool-aid to take them seriously.

There you go - and let that be a lesson to you that when you visit someone's blog you have to eventually speak to the topic of the thread rather than just changing the subject.

Wilbur, you sound like one angry person, but that's your problem not mine.
It's not surprising that nowhere do you even attempt to comment on racism by LibDems and the constant, unwarranted use of the racist label by LibDems on their opponents, and even members of their own party. (The Clintons and Ferraro are an example)
That was the the topic....remember?